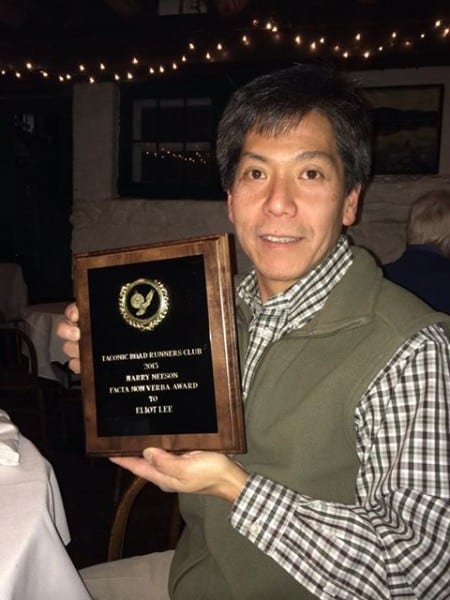 I was quite surprised and extremely honored to receive the ‘2013 Harry Neeson – Facta Non Verba Award’ at the Taconic Road Runners Club annual awards night.  ‘Facta Non Verba’ … very powerful and meaningful words indeed … but, add ‘Harry Neeson’ to the mix … and, now, you have something extremely potent.  It was clear to me that whenever anyone mentioned the name ‘Harry Neeson’ … they thought ‘Facta Non Verba’ … and vice versa.  And, it was also clear that the spirit of Harry Neeson still lives in the hearts and minds of the Club and its members.  So, I felt the need to reflect more on this award.

For those who don’t know me and to put this letter into context, I’ll sum ‘me’ up in a few sentences.  My brief and late running history basically started at age 46 with the TRRC Putnam County Classic in 2008.  I don’t consider myself a ‘hard trainer’ because it is never training to me … it is just me loving to be out there.  I am a runner much more than I will ever be a racer.  I’m good with that.

Being a latecomer to the Taconics meant that I never had the opportunity to meet, know, or be encouraged by Harry.  I never witnessed his racing prowess, work ethic or his tenacity.  And, I never experienced his ‘wit and wisdom’ and his ability to engage an audience.  So, I needed to know more about him.  Sure, it was easy enough to look up NYRR race results for Harry and without a doubt, he had stellar running credentials … many, many sub-3 hour NYC Marathon finishes (~2:40’s range) to his name and even at age 63 in 2001 … a 3:23 finish.  Of course he was a great runner … he was a Taconic!  I took it a step further a read some of the archived TRRC newsletters.  I read the messages of Harry’s passing on April 13, 2007 and even read his wife Carol’s note to the Club that he considered a second family.  I also read that the Club placed a plaque and planted a tree in Harry’s memory at Downing Park in 2008.  I shall make it a point to visit it the next time I am near Downing.  And, last but not least, the Club named this award in his honor.  These are all testaments to what Harry meant to TRRC and its members.  But, I still needed a bit more … something more personal.  So, I reached out to my friend and Putnam Classic co-water stop volunteer, Melanie Benvenue.  Melanie kindly shared some of her thoughts with me so that I could really put everything into context.  Harry encouraged and helped her to her first marathon finish and then with improvements thereafter.  She said that Harry was never a president or officer of the club because he said he was a “doer, not a president.”   He did tremendous things for the club.  With a microphone in hand, he was funny and engaging; and while others do very well, there probably has never been anyone else like Harry.  This is ‘Facta Non Verba’ at its very core.  I’m sure there are many more stories that come to mind anytime two Taconics get together and someone mentions Harry’s name.  His legacy speaks volumes.  But, for me personally, I now have an appreciation for all the smiles that emerge at any mention of his name and, of course … of the true meaning of his award.

I know that Harry was a great runner … but, he was an even greater person.  He was loved by all.  I wish I knew him personally.  But, knowing what I now know, I am even more honored and humbled as a recipient because of what his award truly represents.  We should all have more ‘Harry’ in us.  We can all do more … whether it be in running or in life.  We can all be more encouraging and supportive.

The turkey trots have passed, but the traditions c

Happy Thanksgiving to everyone in our running fami

It’s time to jump in and register for the Decemb