The Taconic Women’s Travel Team rocked the red carpet at the Nike Women’s Half Marathon in Washington, DC on April 28. I mean that literally, since a red carpet covered the street at the start of the race, at which we had what amounted to an elite start, virtually seconds off the”gun”. The team included our organizer, Nancy Young, Tina Batton, Karen Pearson, Tracey Doucette, Carol Hansen, Jenny Setareh, Deb Wessely, Caroline Curvan, Janet Hartman, Cara Lorenzoni, Fran Pisano and yours truly. The qualifying standards for joining the team were very stringent; to Nancy’s question, “Ya wanna come?”, we all answered, “I guess”, and there we were.  We brought along our own cheering section in the persons of Cara’s sister Tricia and Deb’s sister Lisa.  We think they rock, too. 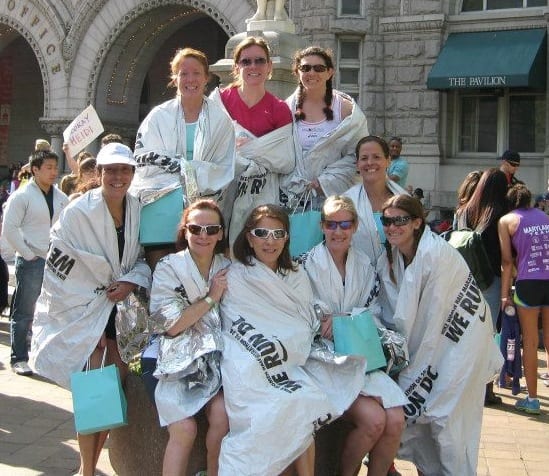 Leading off all 15,000 women were Shalane Flanagan and Joan Benoit Samuelson. The course started and ended on Pennsylvania Avenue near the White House, winding past the Capitol Building, the Lincoln Memorial, and the Kennedy Center, with a beautiful stretch along the Potomac River.  The day was sunnier than we had anticipated, but that only made the course more scenic. There were bands all along the route, but my favorite was the all-percussion band near the Kennedy Center. At the finish, the “icing on the cake” was receiving, not finisher medals, but Tiffany necklaces, presented on silver trays by men in tuxedos! But the “chocolate covered strawberry” on top of the icing  was the fact that I got to speak with Joan Benoit Samuelson after I crossed the finish line.  My colleagues at work told me I sounded like a groupie, and I’m proud to say I am!

Fran received a text  from Karen Pearson later  Sunday afternoon, as we toured the city via the “hop on, hop off” bus tour, with the information, that,   according to early results, Fran Pisano finished 4th in her age division, Carol Hansen placed 2nd in hers, and I finished 1st in mine. We were in the Lincoln Memorial at the time, and Abe was a witness to my “happy dance of joy”.

All in all, it was a very enjoyable weekend, with good company, good food, a wonderful race course, and a rocking race, and, as always,