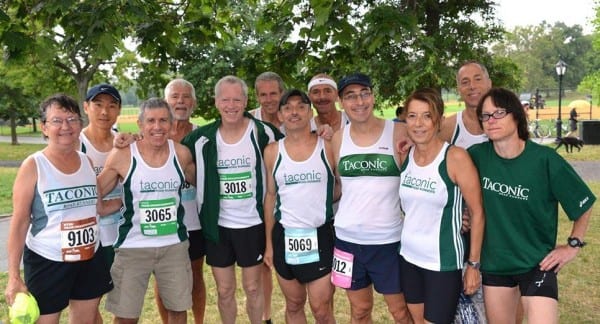 What a great day for a run!  Tom Maile placed 3rd in his division for the men, and we had some awesome women out there as well.  Suzanne La Burt ran a great great race, and placed 2nd in her division, as did Carol Hansen.  Mary Natel went about 80% on the AG scale we think for the first time.  Somehow, Greg Cohen was omitted from the results, so luckily while uploading this page he figured out how to insert himself in the table below while NYRR begins a full investigation.  Or just adds his results.  You know what’s weird?  Referring to yourself in the 3rd person.

Taconic women rule at the Club Team Championship today!  Our Women’s 50’s team got first place in the double points race.  This vaults them ahead of the vaunted Athena Track Club into first place overall by one point!
Our ladies have the opportunity to hold on to first for the year.  Show up and run strong!
Suzanne La Burt, Mary Natell and Karen Davies–awesome.  By the way this same threesome scored 4th in the 40+ women’s category.  Who says we don’t get better with age.  Our women’s 60’s team got 3rd place–good work Carol Hansen, Cathy Groneman and Melanie Benvenue!
On the men’s side the 60’s team got a nail-biter second place finish by 2 seconds over West Side Runners but were 8+ minutes behind powerhouse CPTC.  They are now 11 points behind in 2nd place and are hoping for an anonymous knee capping.  Just kidding, the CPTC team is loaded with talent.  The New York Club scene is, in fact, loaded with so much talent we had only three top three finishers–two second places from Suzanne La Burt and Carol Hanson and a third place from Tom Maile.  And Suzanne, Carol and Tom car-pooled down to the race in an energy saving Prius.  Hmmmm!

Jack Brennan took some great pictures which we’ll put on the site later.  There were a couple of great shots taken by the NYRR photographers as well.

There was plenty of team spirit afterwards as we hung out and drank unauthorized beverages and ate authorized sandwiches.

Great seeing everyone, and a great showing!